Since we first told you about Cheryl-Ann, Soup-er Fan who is participating in this year’s Underwear Affair, her donations have more than doubled!  We want to take a moment to update you about her campaign, tell you more about Cheryl-Ann’s journey with cancer, and remind you to share her story and donate to her cause. Every little bit helps, and we know that with our Soup-er Fans on her team, we can get Cheryl-Ann to her goal!

Here is Cheryl-Ann’s story of discovering and surviving cancer:

“Soon after I first discovered Souptacular at the market,  I was sent to have an ultra sound scan, which found a small lump in my bladder. I was scheduled for a scraping of the mass, and on September 29, heard that frightening six-letter word: “CANCER.”  I was alone, and I was devastated.  I called my husband and simply said, “get to the hospital now.” A wonderful nurse helped arrange a room for us to tell family members that evening.  Of course, our three boys immediately started texting each other to find out WHY they needed to go to the hospital:  “What is wrong with Mom?”  “Do you know anything?” Everyone was concerned and supportive.  My husband stood by my side for the next several days during further tests and scans.

“We knew the sarcoma cells were in the bladder, but the scans were not clear enough to verify any other areas until the actual surgery. I was dressed and waiting to go home when suddenly, the nurse came in and started the IV again. She told us that I was scheduled for surgery the next day.

“It turned out that I had no other option other than invasive surgery because with my type of cancer, radiation and chemotherapy are not viable treatments.  Just a short nine days since I met the oncologist, I was going up for surgery.  I got my kiss from my husband and off I went, full of trepidation.

“I remember the ceiling looking just like it does on TV when you are getting wheeled down a hospital corridor back to my room.  Someone made a comment about my colouring. Just what color was I??  After two blood transfusions that evening, I was stable again.

“Maybe it was a sign of things to come when I got up the next day and walked – a little farther than I probably should have.  I went down to the elevators and down for tea twice a day.  I just could not stay in bed after spending so much of that year in bed!”

Cheryl-Ann McMurray is the Team Captain for Green Drop Drops Cancer in the 2014 Underwear Affair. 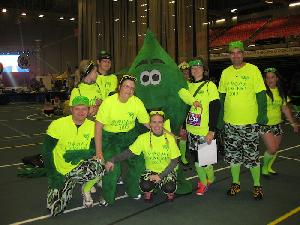 What can you do about it? You can donate to Cheryl-Ann! Don’t be shy – it’s about giving these devastating cancers some exposure and shedding some light on their cures. So please help her in her effort to raise money for care and research for cancers “down there!”